It’s really exciting to be working again with Coventry’s Talking Birds theatre company. We’ve had very productive and enjoyable experiences of recent collaborations. 2013 saw the production of Trade in Lunacy, and in 2014 Malady of Migration.

The script for Malady of Migration was based heavily on our archival research for a Wellcome Trust funded project exploring the migration of Irish people to Lancashire in the post-Famine years, which led to many migrants being confined in the large asylums of Victorian Lancashire. Our teams at Warwick and UCD worked closely with Talking Birds and director and script writer Peter Cann to produce an absorbing piece of theatre based on the stories of individuals facing poverty, the dislocation of migration, prejudice and mental breakdown. The performances were staged in Coventry and Dublin and audiences were extremely enthusiastic about the high quality of the production and the relevance of the topic for thinking about migration and mental health today.

A new piece of work, due to be performed in early July 2017, will focus on our Wellcome Trust funded project on prisons and mental health. It will also complete the Asylum Trilogy that has explored the history of mental illness and its institutions. The Victorian prison became associated with the confinement of large numbers of mentally ill prisoners, and many prisoners developed severe symptoms of mental breakdown under harsh regimes of prison discipline. Again Talking Birds will work with the rich and diverse range of archival material collected during our research.

We are on a fairly tight timescale for this show, and our theatrical colleagues have a lot of reading to do! Some of the materials we supplied are available in full online, although others are only available in libraries and archives and on good old paper. We have supplied Talking Birds with our notes and thoughts on most of the archival materials and will be meeting to discuss them on a regular basis as ideas for the show develop.

We thought you might like some information on the source documents we are working with – these include:

There is some useful material available online, or to buy, so we thought we’d share a few selections with you in case you would like to read along. We’re not meeting with Talking Birds now until early April, so plenty of time to catch up before our next theatre blog – happy reading! 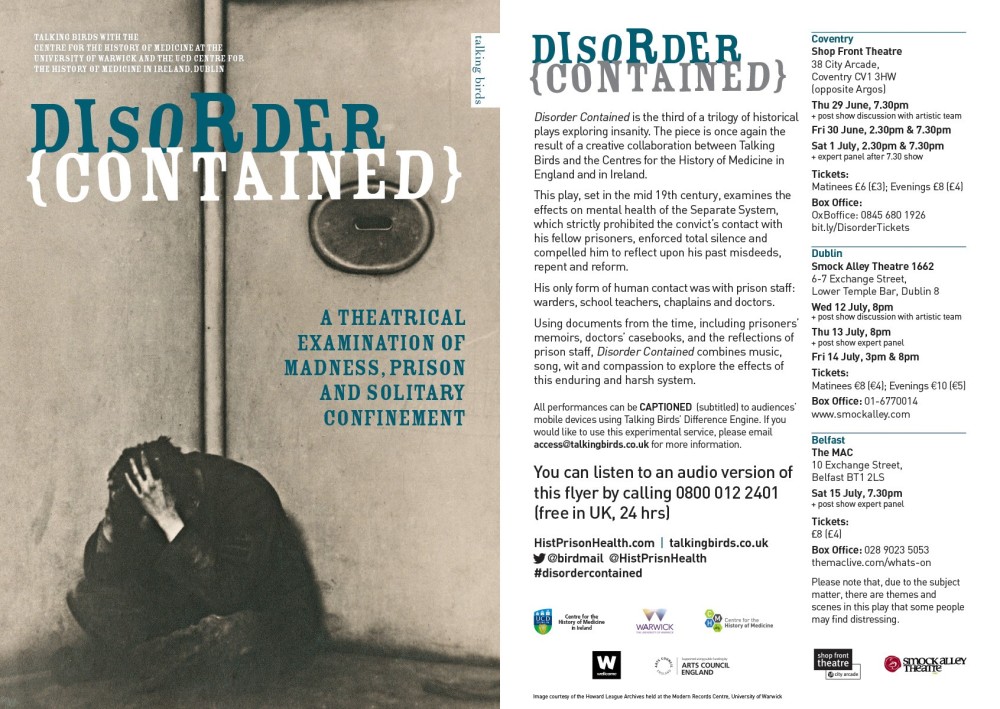